Alzheimer's SA recently moved to our premises.  Not only does this mean that we can pop in for some much needed advice every now and then, but it also gives us the opportunity to do continuous training with them.

Loraine Schirlinger, regional director of Gauteng (Alzheimer's SA) did most of the training, but Sylvia Birkhead (Occupational Therapist) also trained the attendees for one day.

Helen Petrie (Manager) and Avril Maltman (Matron) reported that they enjoyed the training and really learned a lot and gained valuable insight into the disease, thanks to the course. 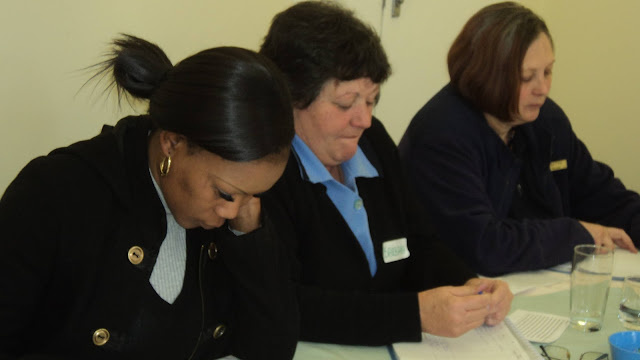 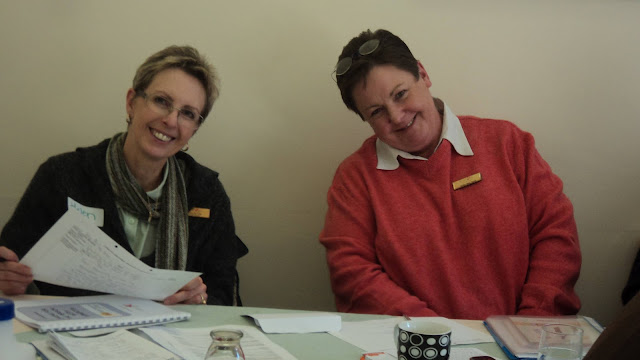 Helen Petrie and Avril Maltman were delighted with the course 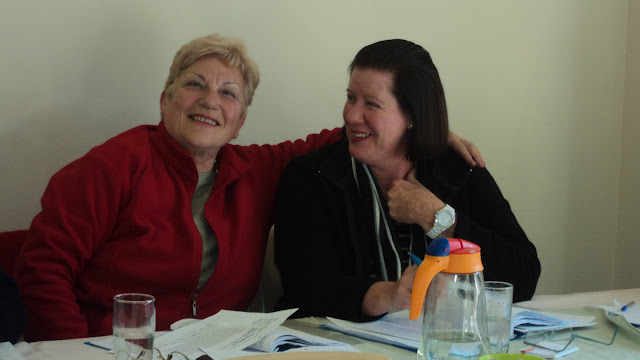 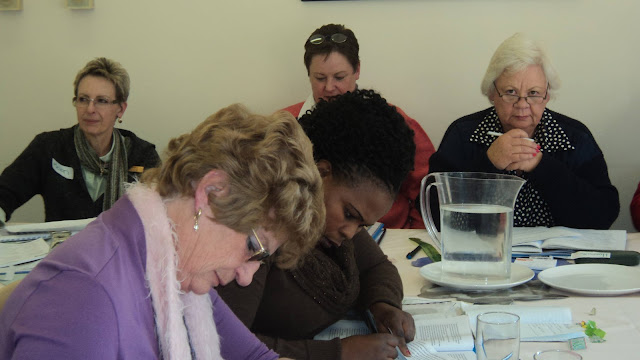 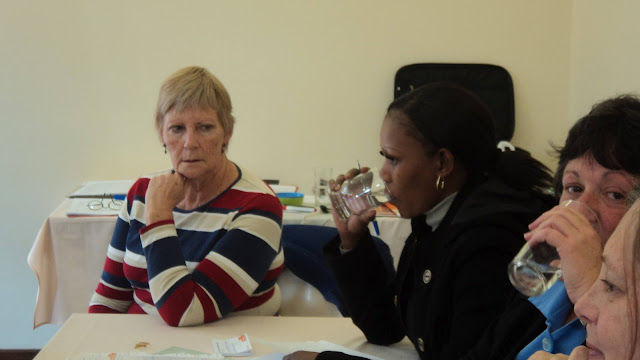 Loraine Schirlinger, waiting for the people to finish their work before continuing with the training

A very special thanks to Loraine and Sylvia for a very enjoyable course!
Posted by OT Elphin Lodge at 15:26 No comments: 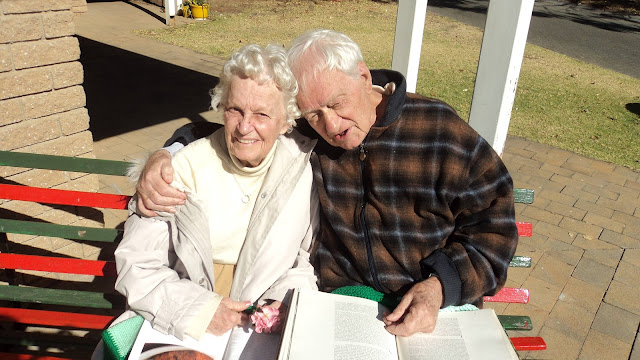 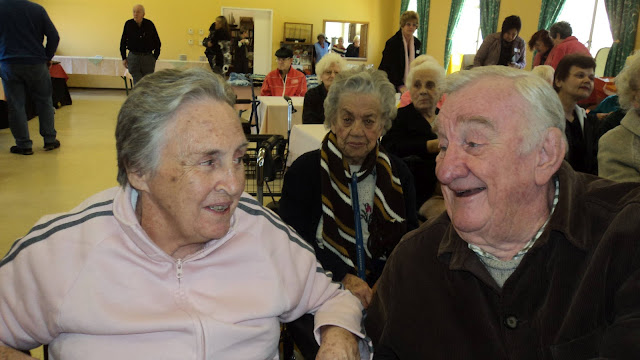 Posted by OT Elphin Lodge at 15:11 No comments:

This week there was a royal atmosphere at the Ron Smith Care Centre, as we celebrated the Queen's Diamond Jubilee through our various activities.

Here is the week's programme:

This went wonderfully.  We danced to songs like Waltzing Matilda and Colonel Bogey and many more.  Some people even started marching to the music. This really was excellent for reminiscence therapy (the use of life histories - written, oral, or both - to improve psychological well-being).

PM:  We started making the crowns that we would need for the Royal Tea on Thursday.  We cut, pasted, decorated and painted.  The ladies from the Elphin Lodge Committee came to help us make some crowns.

AM:  We read interesting facts about the Queen and looked at all the photos of the Jubilee event. The residents found this very interesting and had lots of conversations about the different royal family members and how they looked on the big day.  Some residents even shared their memories of when the Queen came to visit SA in 1947.  It brought back wonderful memories and we listened to God Save the Queen  and Pomp and Circumstance music while making the rest of the crowns.  We worked very hard and in the end we made about 80 crowns for the big event. 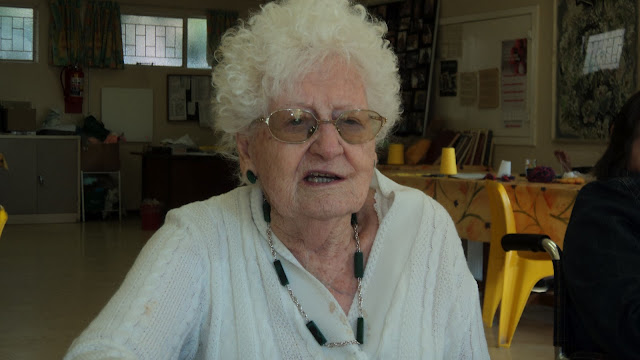 Lorna Smith, our star crown maker of the week.  She decorated more than 20 crowns on her own.

AM:  We did a quiz about the Queen.  It's surprising how good some of our residents' long term memories still are and how well they know all the history with regard to the Queen.

You can complete the quiz online and see if you can do as well as our elderly people did.

PM:  They did some cognitive stimulation by doing a Royal Word Search.  You can do the same right over here.

AM:  The big day has finally arrived.  We had our Diamond Jubilee Royal Tea in the dining room.  It was a lovely morning.  Everyone was crowned as soon as they entered to be "Queen" or "King" for the day. A slideshow of the Queen was shown in the background.  Phyllis Phillips opened the morning with a few words about the historic value of the tea and her own memories of the Queen's visit to South Africa, her wedding etc.  We listened to the National Anthem of England as well as other Royal Marches and pieces.  We watched videos of the Queen's wedding day, Coronation, Family Life and some footage of the Diamond Jubilee Celebrations.  We had high tea with cucumber sandwiches and scones.  It was a lovely morning that brought tears to many residents' eyes.  But tears of good memories of the past, when they were still young and following every move that the Queen made, when they still had to go to the bioscope to see things like the Queen's Wedding, instead of just switching on the TV in the comfort of our homes like we do these days.  Everybody enjoyed the tea immensely and thanked us for organising such a special event. Scones and sandwiches were sent to the residents who weren't able to make it to the dining room. 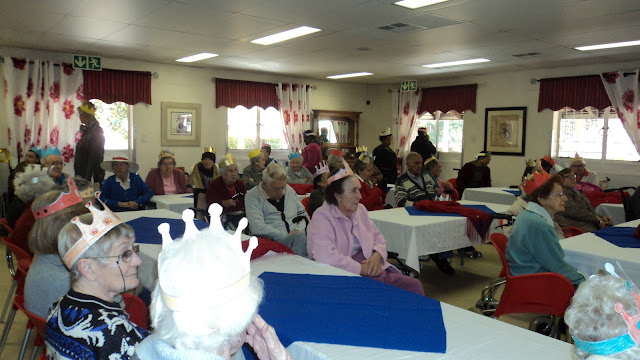 Everybody crowned and having a royal time... 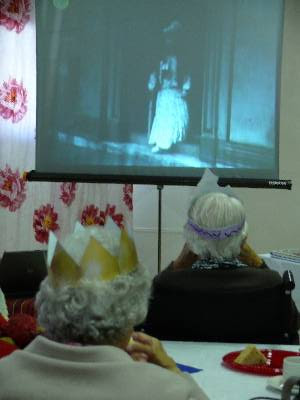 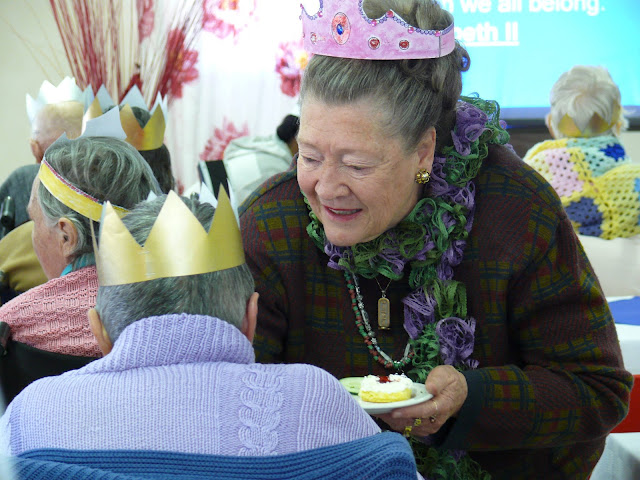 Volunteer Denise McGee, assisting one of our residents Helen Viljoen to enjoy the lovely treats. 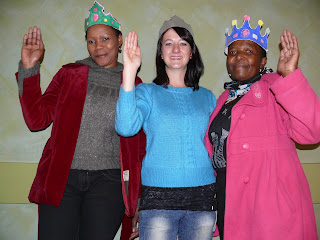 The OT team who worked hard to make the dining room ready for a hight tea.

It was a memorable morning and we had a lot of fun.  I learnt a lot of new things about the Queen whereas the elderly people reminisced about their younger years when they idolised the Queen.

AM:  We showed a film called The Queen in OT.  The residents enjoyed the movie, even though this film doesn't have to do with her whole life, but focuses more on the time after Princess Diana's death.  Helen Mirren does an excellent job acting as the Queen.


Full of wit, humor, and pathos, Stephen Frears' moving portrait of the British royals during the period after Princess Diana's death features not one but two remarkable performances, that of Helen Mirren as Queen Elizabeth II and Michael Sheen as the newly-ordained Prime Minister Tony Blair. They embody their characters and lay bare the motivations behind these prominent people, giving viewers a glimpse into the inner workings of the British monarchy.

We did a repeat of the Jubilee Tea in Riverlodge 3 as a few of our residents with Alzheimers could not come to the Thursday one.  They had a ball of a time. One lady that came to the Thursday tea told me that she was just crowned the day before and she cannot believed that she was being crowned again.
It was amazing to see that even some of the most unresponsive residents' feet were tapping to the music from their past. 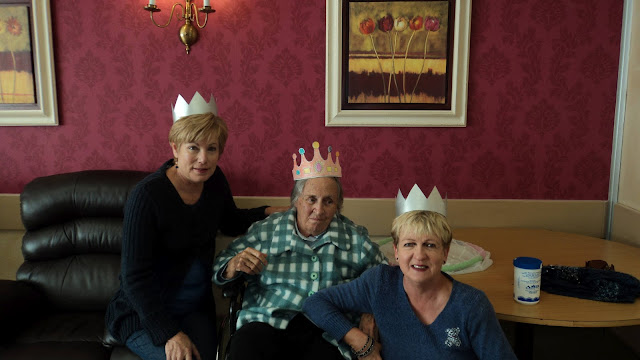 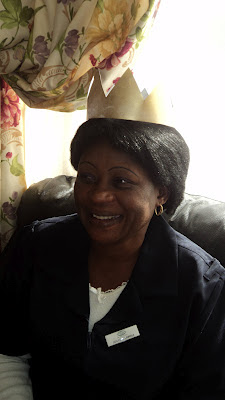 Everybody was crowned, from residents to caregivers...  Johanna said she enjoyed being a Queen. 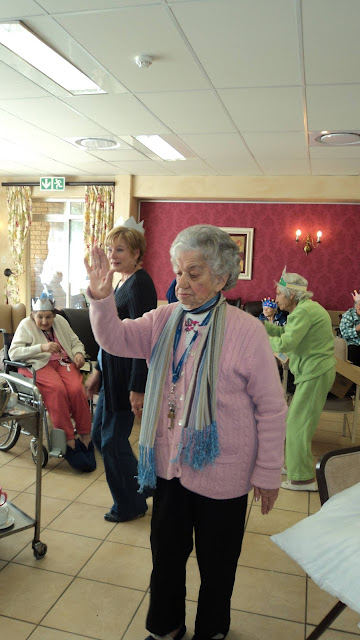 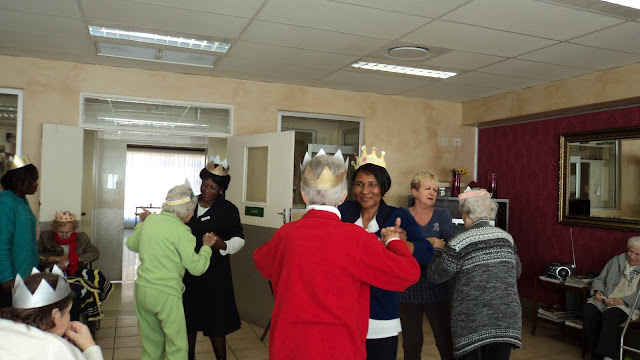 Everybody dancing and having a good time.

That was that for our Royal Week...

I believe everybody deserves to feel like a King or a Queen at least once in their lives...