A brand new group of volunteers began their volunteer work at Rand Aid-run Ron Smith Care Centre at the beginning of the year.

They were invited to attend an Orientation and Training Session on Wednesday, March 16, where they were given an introduction to dementia, including Alzheimer’s disease, by Senior Occupational Therapist, Sylvia Birkhead.  Around 28 volunteers, old and new, attended the training event.

“We felt that it was necessary to introduce our new volunteers to dementia, and to give them a basic understanding of the disease in order to assist them with their ability to work with, engage, communicate and connect with our residents, many of whom have Alzheimer’s or other forms of dementia,” explains Debbie Christen, Rand Aid’s Manager Recreational Programmes and Volunteer Co-ordinator for Ron Smith Care Centre.

“Although not all volunteers work directly in River Lodge 3, our special dementia wing, they will at some stage most likely encounter residents who are mildly or moderately affected by Alzheimer’s, and so the more knowledge and understanding they have about the disease, the more empowered they will be to make a valuable contribution to the quality of life of our residents, and to discover what would bring them meaning and joy.”

Sylvia’s presentation included an explanation of the types and stages of dementia and the fact that whatever form it takes, there is cognitive impairment which usually affects the person’s memory, ability to communicate and ability to reason or make decisions.  As the disease progresses, mood and behaviour can be affected, as well as a decline in skills and abilities of everyday life.

So with increasing loss of function, the person gradually loses independence and requires more care and assistance. She went on to explain the difference between normal ageing and dementia, and presented guidelines on how to talk to a person living with dementia, and especially how to communicate compassionately with a person who has memory impairment.

She also spoke about the importance of planning activities for people living with dementia, and how volunteers can play a significant role in implementing sensory stimulation-type activities for each individual with whom they engage.  Sylvia said, “It is a fallacy that persons affected by dementia are not able to do anything. The memory may go, but the feelings are still there. We need to learn how to tap into what is there within the person and to try and connect with what brings him/her joy and meaning.”

To quote Rayne Stroebel, Regional Co-ordinator of Eden Alternative South Africa, as he shared an experience he had with the Elders of a Care Home: “I cannot quite figure out why the past six days have moved me so deeply. The only thing I can think of is that I have learnt what it means to be truly present. And in that presence my soul was profoundly touched. I became one with the deepest soul of every resident.  I connected with them and through them, with the divine in each of them. I realised and felt it deeply in my being that dementia is a disease that attacks the brain and not the soul… if you are prepared to make yourself vulnerable; to be open to seeing the person, and not the disease and to remain in that presence, something will change forever.” 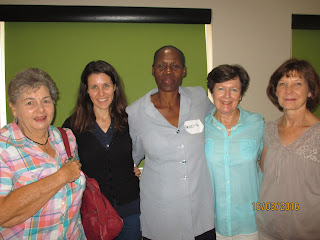 Some of the newly-inducted volunteers at Ron Smith Care Centre, who attended the Volunteer Training Session on dementia: Hazel Spearpoint (Hazel, now retired, used to be the charge sister who ran one of the care centre’s wings), Caroline Booysen, Priscilla Bowden, Carroll Prigge and Noelene Puntis.