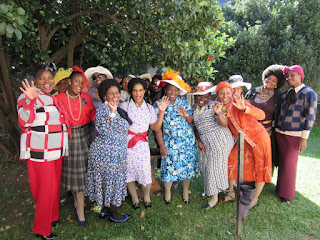 If you were at Rand Aid’s Ron Smith Care Centre on May 23, you would eventually have come across many people dressed up in old-fashioned clothes. It was Vintage Day!  Staff and residents were invited to wear something that was popular or fashionable in the past and then to come along to the Vintage Day Happy Hour on Lakeside, one of the care centre’s six wings.

Earlier in the day, Activity staff helped residents to make cheese straws, savoury biscuits and sweetcorn fritters, which were all on the Happy Hour old-fashioned snack menu, whilst other staff decorated the venue with old record album covers on the walls (think Frank Sinatra, Dean Martin, and Elvis Presley), old records and gold and black balloons. Fashion and music from the good old days were the order of the day, with partygoers dancing, moving and singing along to well-loved show tunes and golden oldies.

The residents were also divided into four teams and participated in a quiz. They were shown pictures of various movie stars and celebrities from the olden days, and asked to identify the people. Pictures of Marilyn Monroe, Fred Astaire, Audrey Hepburn, Shirley Temple, Charlie Chaplin and Doris Day were easily identified, but Lucille Ball had them stumped!

It was a close call, but in the end, Team Green and Team Red tied for first place.  Prizes were also given out for the Best Dressed residents and staff.

Resident Sylvia Lawrence summed up the experience by saying, “Thank you for the party ---you have created such a happy atmosphere for us!”  Many residents were seen leaving the party with a smile on their face and hopefully, a fondly-remembered song or memory in their hearts. 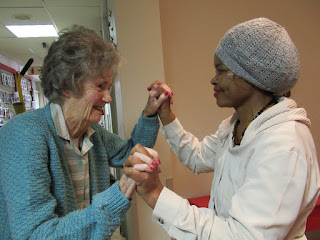 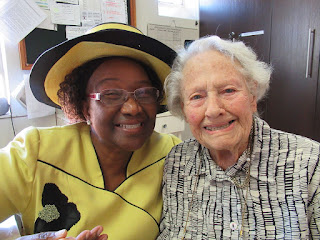 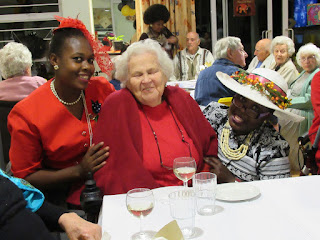 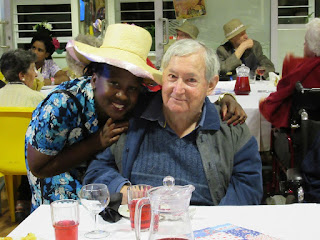 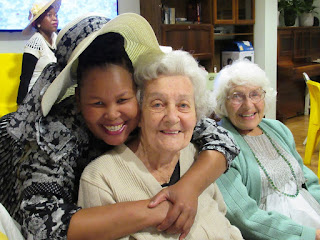 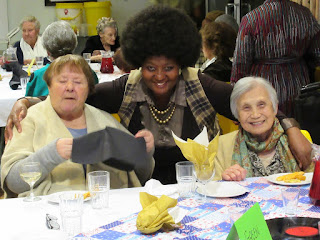 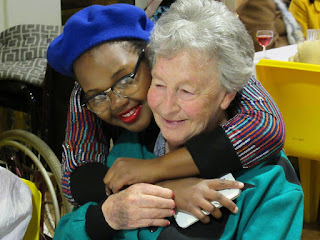 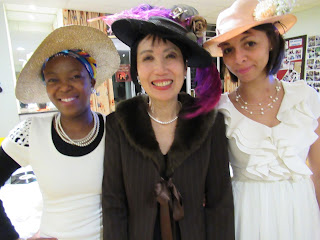 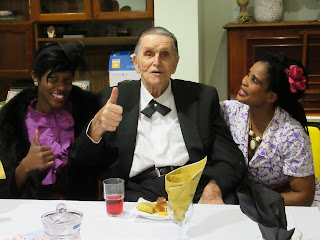 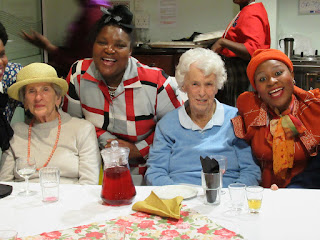 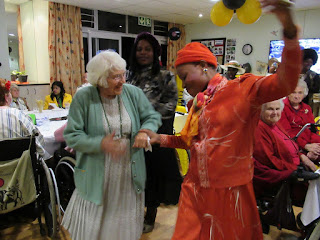 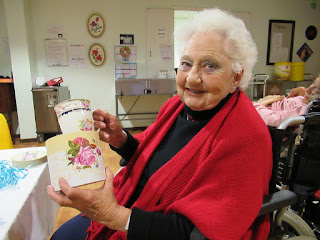 Louise Newman is thrilled with her prize – a beautiful vintage tea mug.
Posted by OT Elphin Lodge at 15:12 No comments: 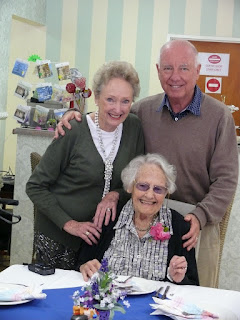 Gracious Grace Snook celebrated her 102nd birthday in the company of friends and family on May 18, 2017.

The smiling, quick-witted woman was seated at the head of the table at Elphino’s, the coffee shop of the grounds of Rand Aid’s Elphin Lodge retirement village. After living independently until the grand age of 101, Grace moved into the complex’s Ron Smith Care Centre around six months ago.

When someone joked that her next big celebration would be her 110th birthday, Grace’s legendary sense of humour came to the fore, and she responded, “I hope you have wings.”

Born in Southern Rhodesia in 1915, during WWI, Grace and her late husband Cecil had two children, daughter Jill and son Donald.
Always a lover of sport – both as a spectator and participant – at the age of 100 Grace was still cooking for herself and doing container gardening.
Helen Petrie, the Elphin Lodge complex manager, presented Grace with a beautiful card and flowers. “We are blessed to have Grace as one of our residents,” she said. 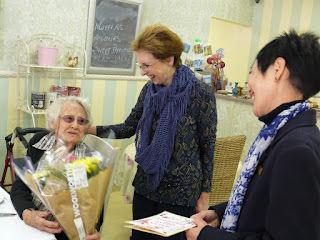 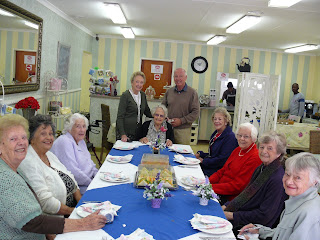 Grace Snook takes pride of place at the head of the table at her 102nd birthday celebration.
Posted by OT Elphin Lodge at 15:54 No comments: 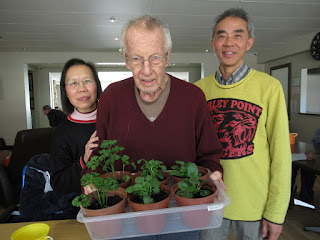 Elaine and Leung Ho with David Eatock and the planted parsley and pansies.

Some of the residents from the special dementia wing at Rand Aid’s Ron Smith Care Centre had their first taste of Horticultural Therapy on May 10. They watched with interest as tables were covered with plastic sheets and various gardening supplies were brought in for their use. Here was something new to enjoy!

Rand Aid’s Debbie Christen, Manager: Recreational Programmes explains:  “Elaine and Leung Ho recently responded to our appeal for new volunteers to assist us with various occupational and recreational activities.  When we had our first chat, I was so excited to learn that Leung is a horticulturalist who has a Baccalaureus Technologiae in Horticulture from UNISA and that he has a special interest in using gardening activities for therapeutic purposes. I immediately thought it would be a perfect activity on River Lodge 3, our special wing for residents living with dementia.”

At the introductory session where care workers came to assist, Elaine and Leung started off with a sensory activity which involved residents rubbing lavender, mint and a special variety called apple mint, between their fingers and smelling the scent that was released. Next was the filling of pots with potting soil, planting parsley and pansies (for colour) and finally watering all the plants.

The session ended with instructions on how to continue caring for their new plants.   When practiced over time, these simple gardening tasks can provide sensory and memory stimulation and mild exercise, increase movement, improve orientation to reality, increase a sense of community and decrease feelings of loneliness and isolation.

This was a wonderful morning activity which the care workers enjoyed as well.  They will all be watching out for the pansies which should be flowering very soon! 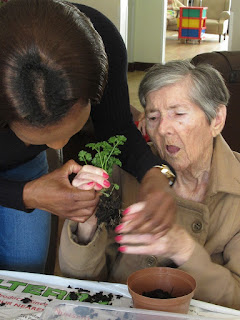 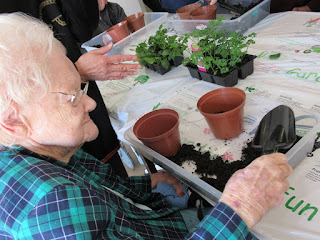 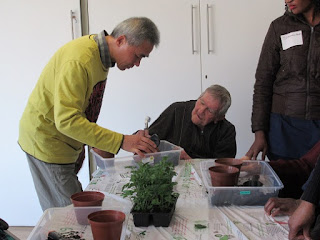 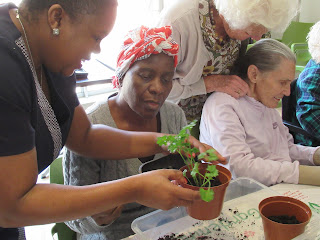 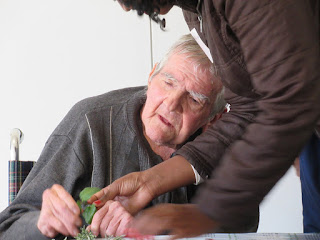 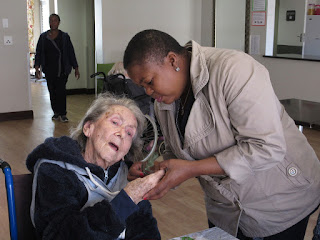 Evelyn Shilubane offers Jean Ive some lavender for her to smell. Lavender has a very soothing and calming effect. 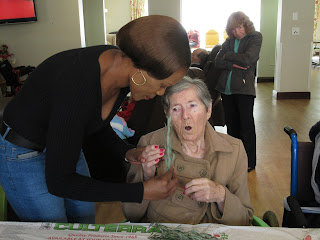 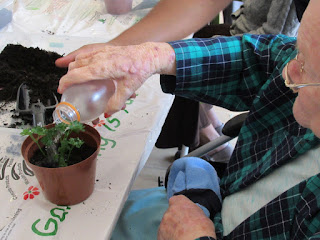 Noel Tilney gives hers plants a drink of water. 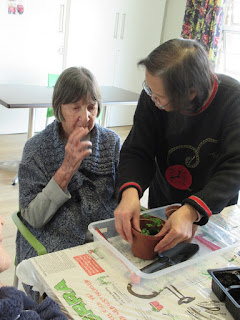 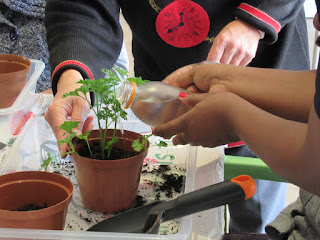 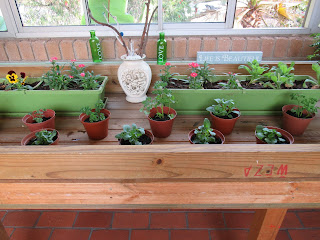 The result of all the hard work.

Posted by OT Elphin Lodge at 10:58 No comments: