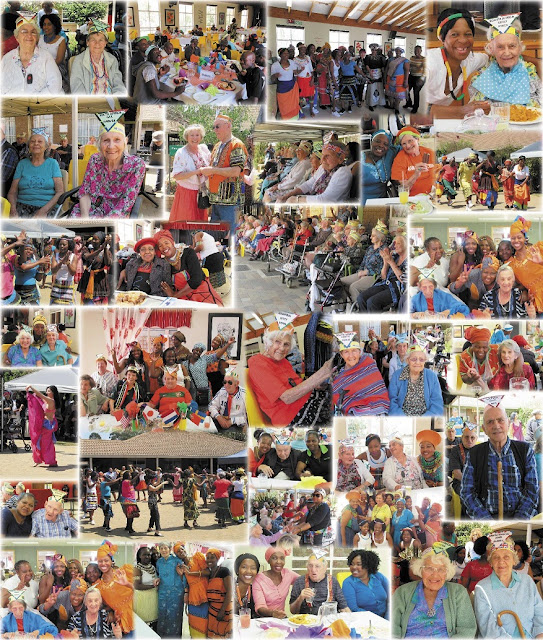 Celebrating our diverse heritages through dance

Heritage speaks of who you are, where you come from and where you are going.

September is a month when all of South Africa celebrates the country’s rich diversity in art, history, customs, traditions, language and food, and as we all know, we are a rhythmic country and there is no celebration in South Africa without music and dance!

Weeks before the Heritage Celebrations at Rand Aid’s Ron Smith Care Centre, residents were excitedly making themselves head bands which were designed with their name and the country of their origin. Although the majority of residents have a South African background, there were representatives from Italy, Portugal, Germany, Holland, Lithuania, Latvia, Indonesia, England, Scotland, Ireland, Canada, Israel, Namibia and Zambia, giving the whole day a universal feel. Colourful flags from all over the world were made in the OT Activity Centre and were used as centrepieces for the gaily decorated tables.

Then on Friday, September 22, the community at Ron Smith Care Centre gathered outdoors in their numbers to celebrate, through music and dance, the richness and diversity of cultures represented at the care centre. Seated in the lovely shade of gazebos and umbrellas, residents and visitors were treated to a cultural dance spectacle performed by various staff from housekeeping, nursing, kitchen and gardening services, who were all beautifully attired in their various national dress.

The dance programme took the audience around the world and included a  traditional Sepedi dance called Step, several Middle Eastern belly dances, the folk dance Tarentella from Italy, traditional cultural dances by the Shangaan, Tshonga, and Venda (Xibelani), Zulu and Xhosa groups, a Spanish Line dance (Ah Si) , and an Israeli folk dance called Nigun Atik. Then it was on to Austria where the staff scattered into the audience and danced with the seated residents to a beautiful Viennese waltz. The show ended with the whole care centre community being invited to join in the last dance to music by the well-known group Malaika.

The cultural dance show was followed by a traditional South African braai which included boerewors, chicken, salads, pap and gravy, and was nicely finished off with an Eskimo Pie, which was thoroughly enjoyed by all.

Debbie Christen, Rand Aid’s Manager: Recreational Programmes, commented: “Music and dance have a way of bringing people together through the sheer joy of music and movement. It truly is a universal language and tends to create a wonderful feeling of unity and harmony.”

Many of the residents remarked that it was a joyous celebration and that they have a new awareness and appreciation for the diversity of cultures in South Africa. They were also interested to learn more about the cultural identities of their neighbours.
Posted by OT Elphin Lodge at 16:38 No comments: