Mama Mia, what a party! 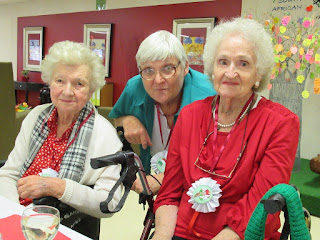 The staff and residents at Rand Aid’s Ron Smith Care Centre, particularly those on the Woodlands wing, were excited for weeks as they planned and prepared for an
Italian-themed Happy Hour for the entire care centre on November 15.

The dining room venue was gaily decorated in green, white and red (the colours of the Italian flag) and guests were invited to wear the same colours, which were very bright and colourful. Each table was decorated with a tin centrepiece which was filled with a paper flower fan with a cheerful, moustached Italian chef in its centre holding a big pizza, the Italian flag, red and green flowers and some raw spaghetti!
These unique creations were made by the residents and staff in the OT Activity Centre.  On the menu were home-made pizza, sausage rolls, themed cupcakes (also made by the residents and staff) and Sangria, light white wine or non-alcoholic punch.

The residents were divided into five teams: Teams Spaghetti, Macaroni, Ravioli, Cannelloni and Lasagne and participated in a memory and colouring-in challenge.
The quickest team to complete the challenge correctly won the prize. Team Lasagne took the honours! The best dressed female resident prize was awarded to Sylvia Dale from Woodlands; the best dressed male resident was Enzo Merolla from River Lodge 1 and the best dressed staff person was Hilda Mabaso – housekeeping supervisor.

The highlight of the evening, however, was the musical skit performed by some of the care centre staff. They acted out the lyrics to a piece of music entitled, “Home to Mama” which is an upbeat light-hearted song about a handsome young Italian man who travels the world, searching for a wife. Along the way, he encounters a Spanish girl (full of fire!), a French girl (ooh-la-la!), an English girl (pretty but shy) and Lorna from California (really wild!). There’s a problem, however, he simply can’t decide whom to marry – they are all beautiful. What should he do? He comes up with a brilliant solution. He will take them home to his Italian Mama and let her choose his bride.

The staff gave a lively, hilarious performance which had the audience laughing, singing, clapping and cheering. Mama Mia, what a happy, joyful time was had by all! 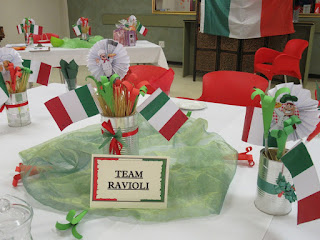 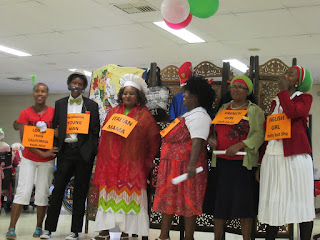 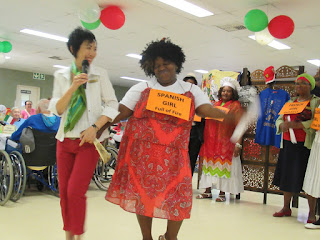 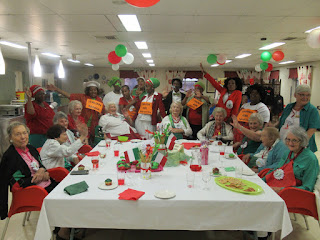 Staff and residents from Woodlands (aka Team Ravioli and the evening’s hosts) with the cast from the musical skit, “Home to Mama”. 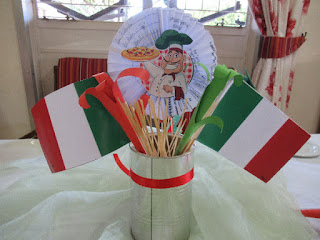 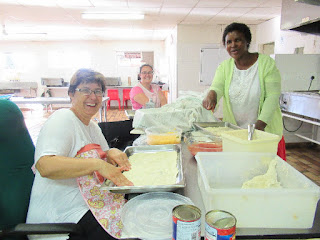 The preparation was as much fun as the day itself! 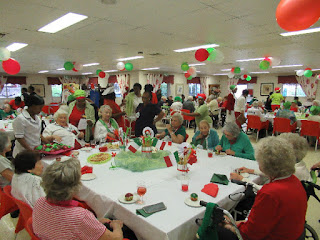 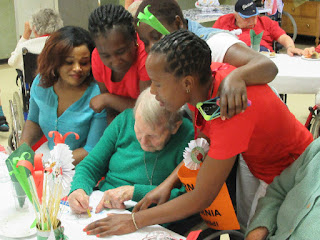 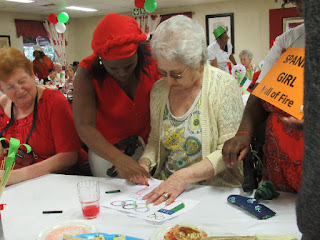 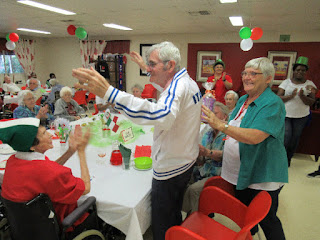 Everyone applauds as Enzo Merolla takes the prize for the best dressed gentleman. 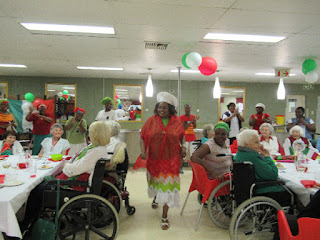 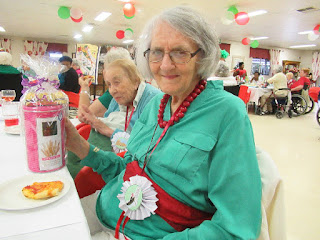 Winning the prize for the best dressed lady is Patricia Dale. 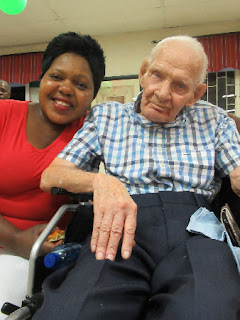 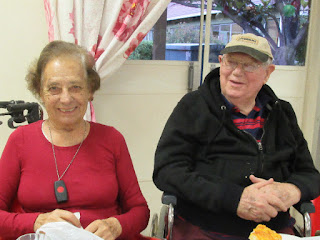 Posted by OT Elphin Lodge at 13:06 No comments:

Letter of gratitude from family of former resident

RE: Gratitude for care of Margaret Cohen

This is just a note to express our sincere thanks to so many people at Elphin Lodge and Ron Smith Care Centre for their kindness and care of our mother, Margaret Cohen, in the weeks and days leading up to her passing.

Mom lived at Elphin Lodge for many years and as her health deteriorated, it was an enormous comfort to her – and to us – to know that even though she continued to live in her flat, help was just a call away.

After her last illness which resulted in her being in ICU for 35 days and in hospital for a further seven days, she was admitted to Ron Smith Care Centre’s River Lodge One.

We were blown away by the quality of the nursing care, the incredible compassion shown to her by every single person there – from the cleaning staff and nurse aides right through to the two amazing sisters – Sister Lianne and Sister Tilly.

Our father, Max Cohen, also spent his last days in River Lodge One some eight years ago. The contrast to what it was like then, and what it is like today, is incredible. Through your  Eden Alternative journey, the place has been transformed into a warm and homely environment. The pretty flowers in the bathrooms, the thoughtful messages and pictures on the walls contribute to this – but most of all it is the caring, friendly attitude of the staff, that makes such a difference. Mom was so appreciative of this loving care – and so were we.

We also truly appreciated the way Sister Lianne and Sister Tilly kept us constantly informed about her condition; the way they personally kept checking in on her, especially during her final days and hours; and for their compassion and caring for us, during her final hours and afterwards.

We’d also like to thank the admin team at Elphin – Phyllis Phillips, Auriel Wittert, the maintenance staff and so many more – for assisting us after mom’s passing with so many things: from the setting up of prayers in the clubhouse to assisting us with clearing her flat.

Ghouls and witches come to tea 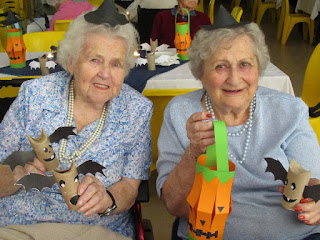 Elaine van Heerden and Sarah Richards with some of the spooky table decorations that were lovingly made by residents.

With the month of October being known as the Month of the Elders, residents from Rand Aid’s Ron Smith Care Centre were treated to a lovely tea with a Halloween theme on October 26.
In the week before the event, the residents were busy in the activity centre, making table decorations to create a fun, Halloween atmosphere. Pumpkin lanterns, flying bats and witch party hats were the order of the day.
After a delicious tea of quiche, sausage rolls and cream scones, the tables were pushed back so that the residents could dance away the afternoon. 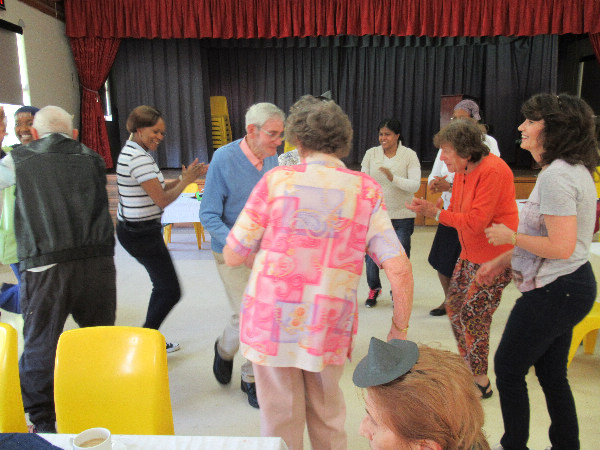 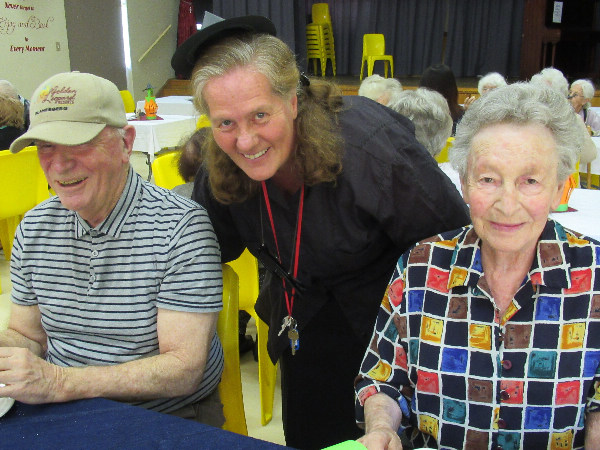 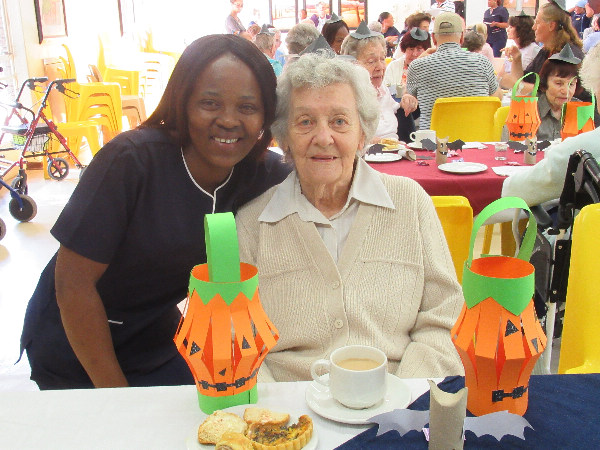 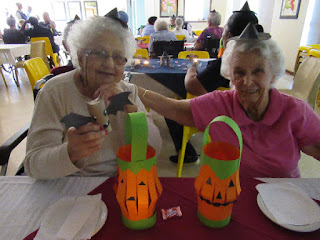 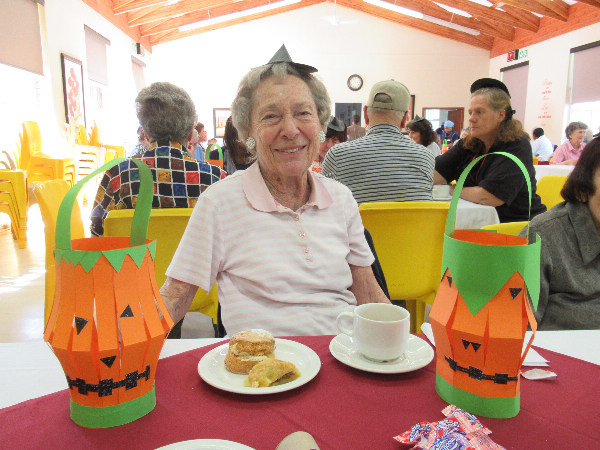 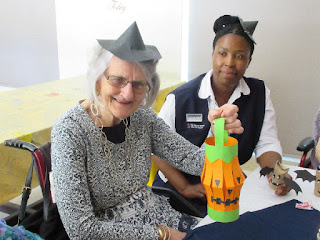 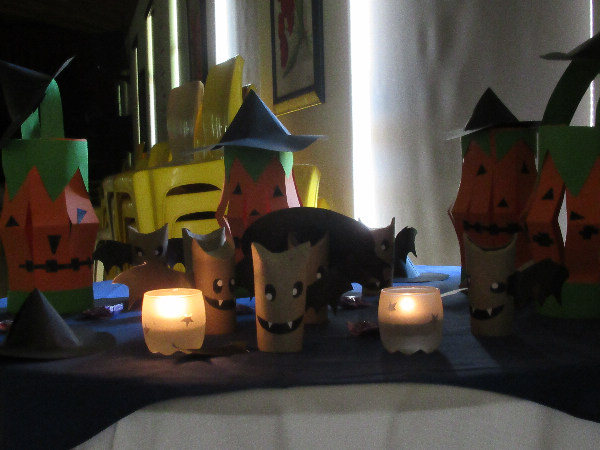 Posted by OT Elphin Lodge at 11:17 No comments: