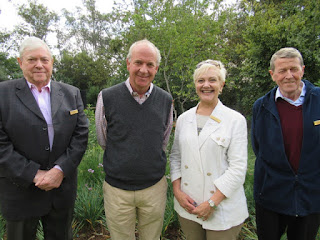 Rand Aid Association’s Ron Smith Care Centre celebrated the opening of its Woodlands Garden and its facilities on 20 April.

Board members, employees, residents and village committees celebrated the opening of the lovely landscaped area -  which was designed by Anthony Schaffler from Schaffler Nurseries - and includes a beautiful new lapa, with braai facilities; a pavilion overlooking the new Astroturf croquet lawn; mini golf (putt-putt); and a jungle gym for children who visit their loved ones. 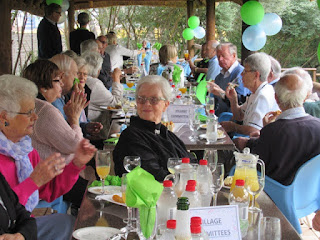 “The opening of Woodlands Gardens is another great occasion in the ongoing redevelopment, renovation and expansion of the Ron Smith Care Centre,” said John Robinson, Rand Aid’s chairman of the board.

Over the past five years the care centre has been transformed to offer even better care for elders and its redesign ensures that it is able to care for their special needs.

Robinson acknowledged that the introduction of the Eden Alternative has ensured this transformation. 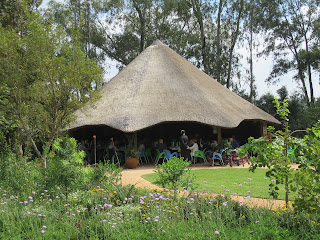 “The enthusiasm, training and dedication of management and staff has contributed to making this one of the best care establishments of its type in Africa. The Ron Smith Care Centre has been recognised for its exemplary provision of care, facilities and services for the aged by the United Nations World Health Organisation,” he confirmed.

Part of the opening celebration involved the unveiling of a plaque, which acknowledges a heartfelt donation from Barry and Theresa Dubb, in honour of Barry’s mother Joyce Dubb, a resident at Ron Smith. When the Dubbs got married, they requested that donations be made to the care centre in lieu of wedding gifts and it is this funding which kick-started the garden project.

The croquet lawn and putt-putt course were officially opened when residents Sylvia Laserow hit a croquet ball through a wicket and Christine Kincaid-Smith attempted a putt-putt hole-in-one!  A champagne toast, in honour of the new garden and facilities, followed. 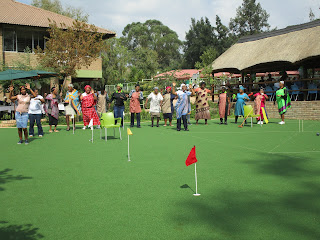 The care centre’s employees concluded the event in traditional dress, singing a beautiful blessing for the garden.

Robinson is sure that Woodlands Garden is a welcome addition to the care centre and will bring much enjoyment and to residents and their families and friends.

Ron Smith Care Centre’s complex manager Helen Petrie invited guests to view the new widened bridge over the Jukskei River (the old one was destroyed by severe storms and flooding in November 2016) and said that it can now accommodate golf carts and wheelchairs. This increased accessibility will hopefully encourage more interaction between all of Rand Aid’s retirement villages.

Posted by Allison Cooper at 09:36 No comments: 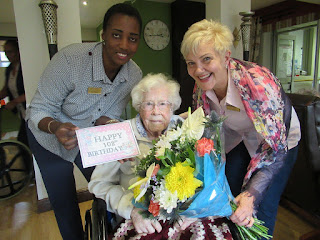 When Betty Haughton was born, World War I was raging, and stainless steel had just been invented as a way of improving the quality of gun barrels. Movies were to remain silent for another 11 years, when the first ‘talkie’, The Jazz Singer, was screened.

On April 19, 2018, this well-loved resident of Rand Aid’s Ron Smith Care Centre turned 102, just two weeks after fellow resident Kitty Venn turned 101.
The management and staff of the care centre presented her with a bouquet of flowers and a special card.
Born in Britain, Betty lived in South Africa for most of her adult life. She was a keen bowls and bridge player and worked for many years as secretary of Linksfield Primary School.

Posted by Allison Cooper at 16:25 No comments:

Volunteers needed to walk with elders 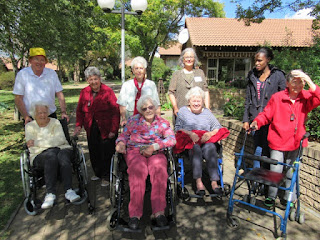 With a dam, prolific birdlife and stunning gardens, it is the perfect place to revive your soul, and what better way to do that, than by taking a walk through the village.

Walking as a recreational activity has numerous health benefits and can increase a sense of wellbeing as one experiences the joys of being outdoors. Walking can also lessen the symptoms of arthritis, decrease anxiety and depression and improve overall heart health.
With these benefits in mind, a walking group was started for the care centre residents a few years ago and is highly dependent on the help of volunteers as some participants are in wheelchairs and need to be pushed, while others need someone to walk by their side.

Debbie Christen, Rand Aid’s Manager:  Recreational Programmes says, “The Eden Alternative philosophy which we follow is based on the core belief that ageing should be a continuous stage of development, growth and pursuit of meaningful and joyful activities.  To this end, we so value our volunteers, who help our elders to keep their bodies, minds and spirits engaged and active.”

The Walking Programme takes place on Mondays from 11:00am and Thursdays from 10:30am. If you are able to volunteer your time, please contact Debbie on 011 882 6296 or email dchristen@randaid.co.za

Posted by OT Elphin Lodge at 16:13 No comments:

The ever-smiling birthday girl was presented with a beautiful bouquet of flowers, birthday greetings and special wishes from fellow residents and staff of the Rand Aid Association-run care centre.

A tennis player until shortly before she turned 80, Kitty lived independently until she was 98 when a fall and subsequent hip replacement necessitated her move to the care centre.
Born Doreen Ruby Mole in 1917 in Swakopmund, South West Africa, she was the fourth child in a family of 12 children.

She and husband Oliver had four children, 18 grandchildren and 27 great grandchildren.
Kitty still enjoys frequent walks – albeit it with a walker.

“She is an amazing lady with a smile that just lights up and encompasses all those in her presence,” says Debbie Christen, Rand Aid’s Manager: Recreational Programmes. 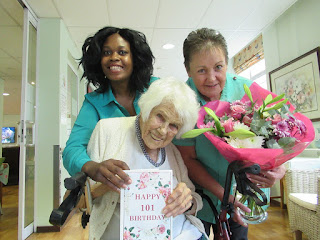