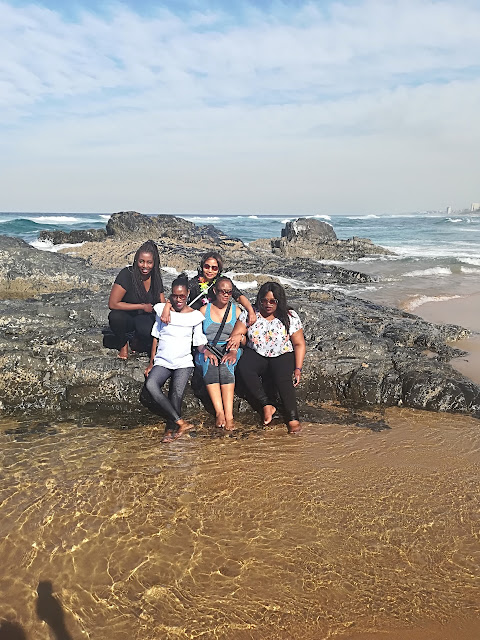 When professional nurse Thili Sibiya joined Ron Smith Care Centre’s nursing team two years ago, she found herself in almost alien surroundings, despite her years of experience in caring for elders.

The approach to care was vastly different to what she was used to.

“My previous experiences were of institutional-type care. Residents lived a very regimented, ordered life, with little personal choice on when and how they would do things. Ron Smith Care Centre works very differently, however. Here, people are at the centre of everything. If a resident fancies a morning in bed, he or she may do so without forfeiting breakfast. Rather, they will be able to eat when they are up and ready,” she says.

“Ron Smith Care Centre is a wonderful community with strong trust relationships. Family members or residents need not go through a central person when they have an issue they wish to raise; instead, they can approach any staff member. It is an open, friendly environment.”

The difference in approach is thanks to the Eden Alternative philosophy that is based on the core belief that ageing is a continued stage of development and growth, rather than a period of decline. It seeks to position places where the elderly live as habitats for humans rather than facilities for the frail, and it supports the creation of communities which help eliminate the plagues of loneliness, boredom and helplessness.

In 2016, Ron Smith Care Centre, which is run by NPO Rand Aid, became the first organisation in Gauteng, and only the second in Africa, to become members of the Eden Alternative South Africa registry.

While the Eden Alternative philosophy is all about making the lives of elders richer, it does so by ensuring buy-in from the residents themselves, family members and staff members at all levels. As care partners, staff members need to be empowered, involved and feel valued.

Sr Thili has found an openness and lightness in her working environment over the past two years and has not only given thanks for being part of a forward-thinking care centre, but in fact actively helped promote Eden Alternative values by organised a bonding weekend away for her and a few other carers.

She felt the need to get to know her colleagues better in a relaxed environment. Durban, with its buzz and beaches, provided the perfect backdrop and the Rand Aid group – all ladies from the Riverlodge 1 wing – enjoyed a wonderful, self-funded weekend away in July.

Some of the ladies had never before been to the ocean while Sr Thili herself was last there when she was in primary school. The trip, she says, was a talking point not only for those who went, but the residents too. “Everyone was excited for us and wanted to hear all about it when we were back.”

“When we get busy, it is hard to prioritise staff morale, but Sr Thili took the initiative to create a wonderful platform for carers to recharge and reach out. This outing opened the way for better communication between them which will positively impact on their happiness and as a consequence, the happiness of residents,” says Matron Avril Maltman, Rand Aid’s senior nursing manager.

For information on the Eden Alternative South Africa, go to www.edenalt.co.za and to learn more about the Ron Smith Care Centre, go to www.randaid.co.za. 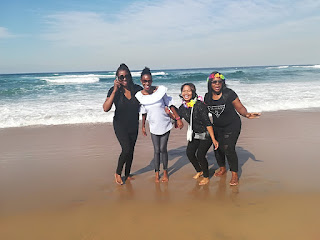 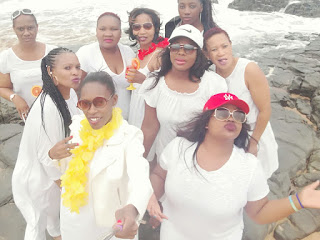 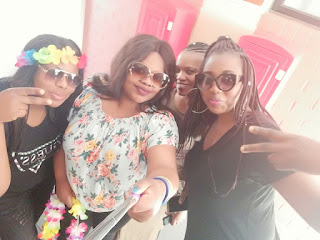 Posted by OT Elphin Lodge at 11:32 No comments:

Elphino’s, the charming coffee shop situated in the grounds of the Elphin Lodge retirement village in Lyndhurst, has had a make-over.

Interior designer Anne-Mare Liebenberg worked her magic to give the coffee shop a fresh new look. A huge panel of pink roses is the focal point of the shop, which is bright and inviting.

Sheer roller-blinds have been installed at the outdoor seating area to protect visitors from the elements.

Elphino’s opened in 2012 in the Rand Aid retirement village. It is a wonderful gathering spot for people visiting residents of Elphin Lodge and Ron Smith Care Centre, but also welcomes anyone who is looking for a supportive environment to enjoy an outing with an older person.

Wanda de Groot, who took over as manager of Elphino’s just over a year ago, is also introducing a new menu. Old favourites have been retained and there are a few tempting new offerings.

The food is freshly prepared and very well priced. To give you a teaser: a chicken mayo toasted sandwich served with chips is R29, a cheese and bacon spud with coleslaw is R35, fish and chips are R45, a Cajun chicken and avo wrap is R42 and breakfasts range from R27.50 to R50. Enjoy a scone with jam and cream for R20, chocolate or toffee pudding for R30, a filter coffee for R18 or a milkshake for R25.

Elphino’s is open on Tuesdays to Sundays from 9am to 4pm and provides a welcoming environment for older persons and their loved ones or carers. 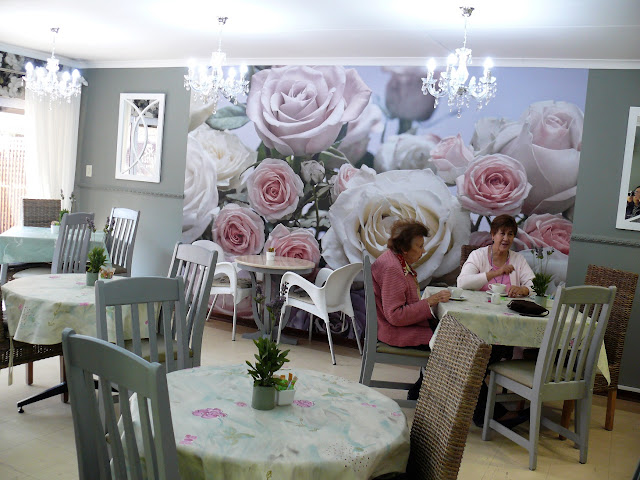 Elphino’s coffee shop has been given a fresh, modern look. 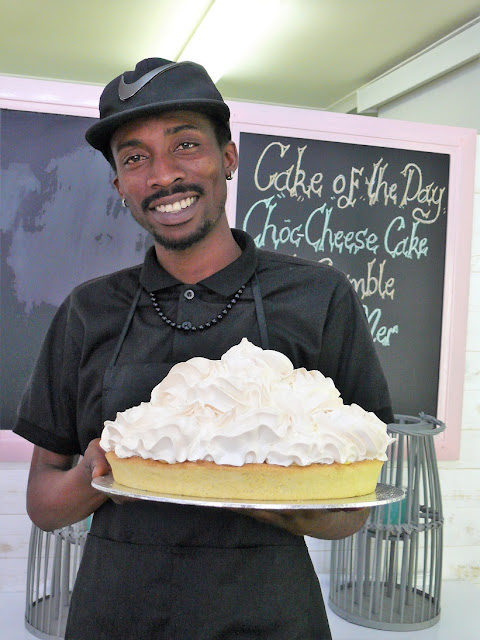 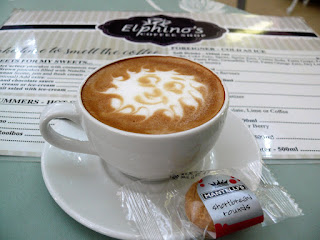 Enjoy a perfectly made cappuccino as Elphino’s. 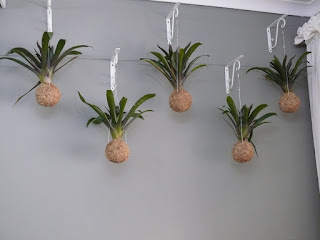 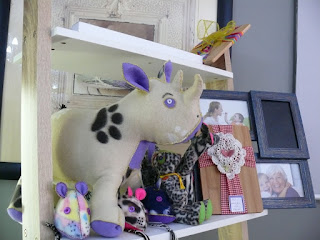 A small selection of hand-made crafts, sauces and jams are on sale at Elphino’s. 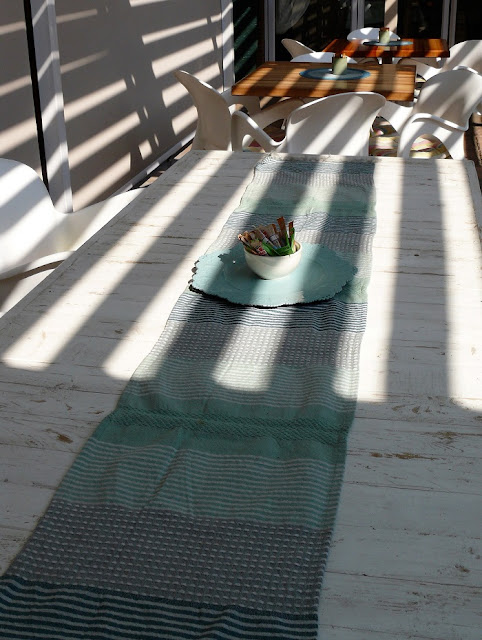 The outdoor seating area is now protected from wind and glare, thanks to roller blinds. 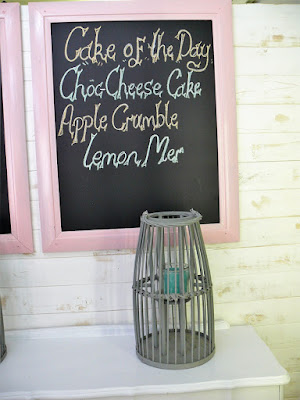 Remember to leave space for a slice of cake, a pancake, waffle or milkshake. 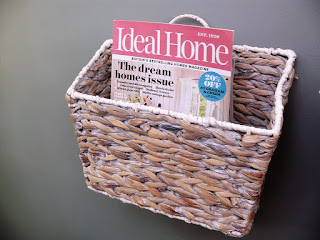 Browse through a magazine while enjoying your meal. 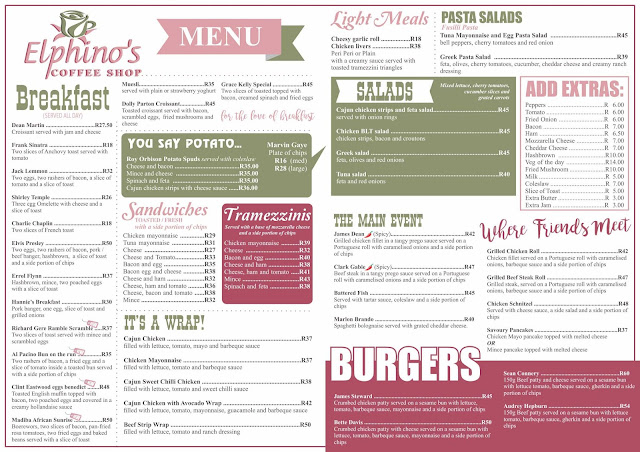 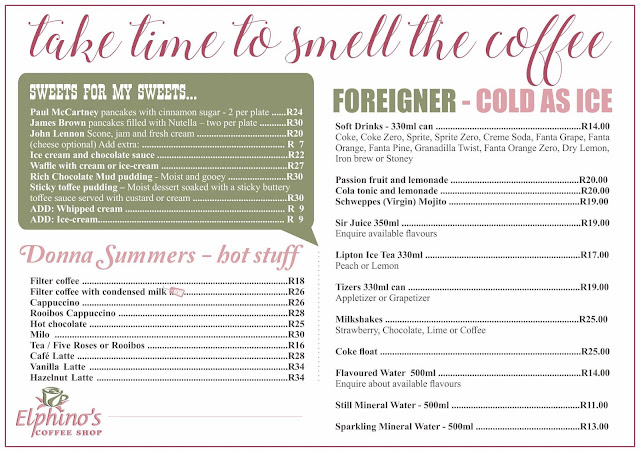 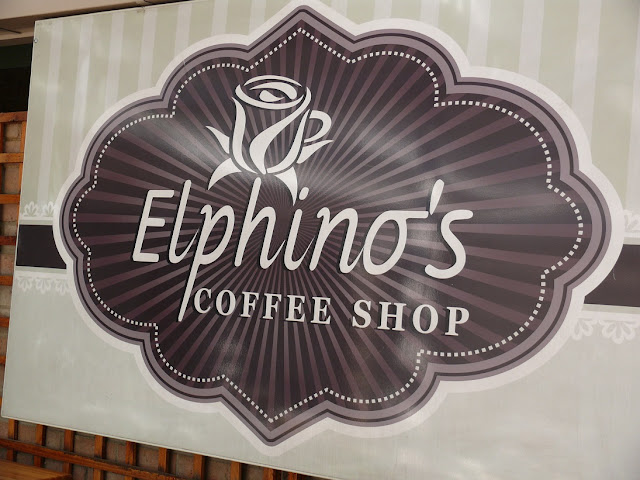 Posted by OT Elphin Lodge at 11:21 No comments: 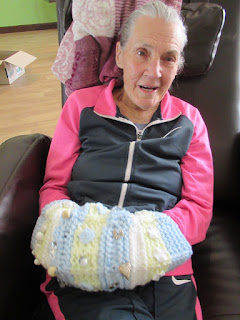 Resident Dawn Hazzard is delighted with her Twiddle Muff!

While they may look a bit like knitted leg warmers, Twiddle Muffs provide visual, tactile and sensory stimulation for people living with dementia.

Often people with dementia have restless hands and Twiddle Muffs, which are knitted tubes with various accessories attached to them, help soothe and comfort those who are anxious or agitated.

Edenvale resident Helen Tuininga kindly knitted and donated 50 Twiddle Muffs to Rand Aid’s Ron Smith Care Centre. In a letter accompanying the donation, Helen explained that in memory of her 81-year-old mom, Peggy Waldron, the donation of Twiddle Muffs is a small gesture to say thank you to Rand Aid and all care staff who make a difference in the lives of the elderly.

She said that the Twiddle Muffs were made especially for residents living with dementia and Alzheimer’s disease and commented that “in some research, it is alleged that Twiddle Muffs help relieve anxiety when fiddled with and they are good hand warmers as well!”

The care centre’s staff and volunteers recently handed out the Twiddle Muffs to the residents on River Lodge 3, the special wing for residents living with dementia, and they were received with delight. 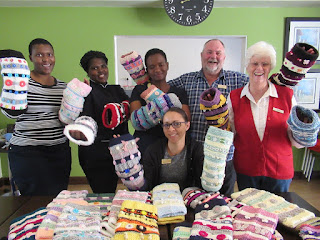 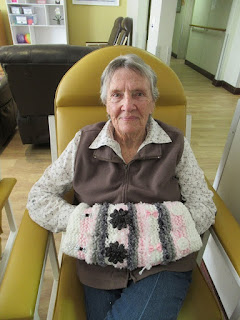 Barbara Wapnick is pleased with the Twiddle Muff she chose.

The blankets were the result of a knit-a-thon organised by Rand Aid’s Ron Smith Care Centre Activities Team for Mandela Day. Knitted squares were then sewn together to make the blankets, especially meant for the residents of Jordan House.

The caring team from Rand Aid also brought along specially-made iced chocolate muffins and biscuits and shared these at tea with the 80 residents.

The director of Jordan House, Pearlene Meadows, thanked the visitors for taking the time to come all the way out to Westbury to see them and for their generosity and kindness. She said that the donation will go a long way towards adding to the comfort and well-being of their residents. She went on to say that as an NGO which cares for the disadvantaged elderly and frail, there are many challenges that they face, and sometimes it is worrying when there is a shortage of food, clothing, cleaning and personal hygiene supplies.

“But then angels like yourselves come along and supply us with exactly what we need at that moment. God bless you for caring for our family here at Jordan House.” 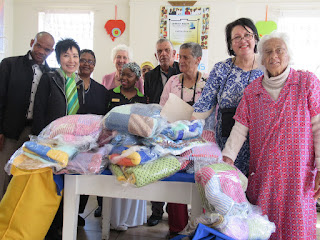 Some of the Rand Aid care team with the director of Jordan House, Pearlene Meadows, (second from right) and some of the residents.

Dorothy dances her way to 100 years of age


Sitting in a pool of sunlight, Dorothy Mary de Bruyn’s face lit up when she was handed a bright bunch of flowers and a special card on the afternoon of her 100th birthday.

Her family celebrated her centenary a few days earlier, to coincide with a visit from daughter Rosalie who lives in the UK, but management and staff of Rand Aid’s Ron Smith Care Centre, where Dorothy lives, made sure that her actual birthday was memorable too.

Dorothy was born in Johannesburg on August 21, 1918. Her parents were Evelyn May and Robert Johnston. The families were originally from North Yorkshire and the Loch Lomond area of Scotland respectively.

She spent her early life in Johannesburg and was educated by nuns at the Belgravia convent. Her father drove the first steam engine to Swaziland and the family spent many years living in Carolina.

Dorothy’s childhood was dedicated to ballet and at the age of 16 she passed the Royal Academy of Ballet Elementary exam and started teaching.

The family had by this time moved back to the East Rand where her father was the engineer at the Far East Rand hospital. She met and married Christian Mauritz de Bruyn. As a couple, they were keen ballroom dancers and gave exhibitions at local dances.

They settled in Brakpan and Dorothy’s first ballet studio was in Kitzinger Avenue. She was a well-known ballet teacher on the East Rand at a time when June Meyer, the Gardener sisters, Rosemary Wilson and Thelma Isaacs were all active and teaching. A highlight of the dancing calendar was the Springs Eisteddfod where everyone competed.

She has had a lifelong love and enthusiasm for ballet and even took her studio to see Nadia Nerina and the Royal ballet when they toured South Africa in the 50s.

In the 60s and 70s she travelled weekly from Brakpan into the Platteland and had large ballet studios in Bethal and Ermelo. She was very highly regarded and became an examiner for the Royal Academy of Dancing. At the age of 50, she learned and took all the examinations in Classical Greek dancing and became very knowledgeable about Greek mythology.

This led to her choreographing a dance of Persephone, the Queen of the Underworld, coming back from the Underworld carrying a pomegranate. In later years, she helped former pupils like Jacqui Chalom teach before finally retiring in her late 70s.

Dorothy has always lived her life with enormous energy and enthusiasm. She particularly loved travelling and exploring new places. She was a regular visitor to the UK but particularly like the buzz of the markets in Hong Kong and Bangkok.

“She loves food and going to good restaurants and she never forgot a good meal or how much it cost! She has a lovely sense of humour and her granddaughter has abiding memories of her saying she ‘was as full as a tick’ after a particularly filling meal,” shares Rosalie. 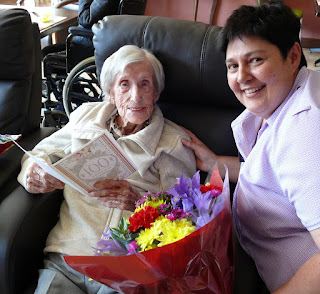 Posted by OT Elphin Lodge at 09:19 No comments: