The nursing staff of Ron Smith Care Centre’s River Lodge 1 and 2 packed their swimming towels and headed off to Happy Island water park in Muldersdrift on October 26 for a day of team-building fun.

Teamwork and team building are important aspects of the Eden Alternative people-first philosophy that has been embraced by the care centre and regular staff outings are thus organised by the staff, for the staff.

Sister Leanie Bessinger shares the events of the day:

“On arrival, we picked out a big enough spot for our large group of 19 people on the beach in front of the sea, pitched our gazebo and got organised.

“Everybody was in a hurry to get into the water. We didn’t know where to start as there were so many options of large waterslides, an enormous sea and, of course, the lazy river.

“We were like children giggling and laughing all the way, trying to pick our first water slide. We were a bit apprehensive going on our first ride as it was a huge waterslide, called ‘The Trumpet’. Four people go on one tube! I think we all had palpitations sitting on that tube waiting to be pushed down the slide.

“I don’t think we had ever screamed that hard. You literally shoot into an enormous trumpet and are pushed from one side to the other by a strong stream of water, until it spits you out at the bottom like a piece of chewing gum.

“Needless to say, we were laughing and screaming at the same time when we were ‘spat out’ into a small pool. We struggled to get out of the tube as we were all in stitches, laughing at each other screaming as we came down.

“The Trumpet was just the beginning of our adventurous day. We went on every slide possible. We tried the lazy river – on which we got stuck, swam in the sea and were tumbled by the waves – with some lost swimwear and counted down with the rest of the patrons each time a huge wave was coming. WE HAD FUN!

“On that day we forgot about all our troubles; we were carefree. We were like children starting a new adventure. Our only worry was which slide would be next.

“I don’t think there was one person who did not enjoy themselves. We came back home tired and full of bruises, with painful bodies (a reminder of our real age!), some of us worse than others. But I think if you ask any of us if we would do it again, we would say ‘yes’ without a second thought.

“This day created a sense of camaraderie amongst us. When we see each other in the corridors, we greet each other with a smile, remembering the day we had so much fun together.” 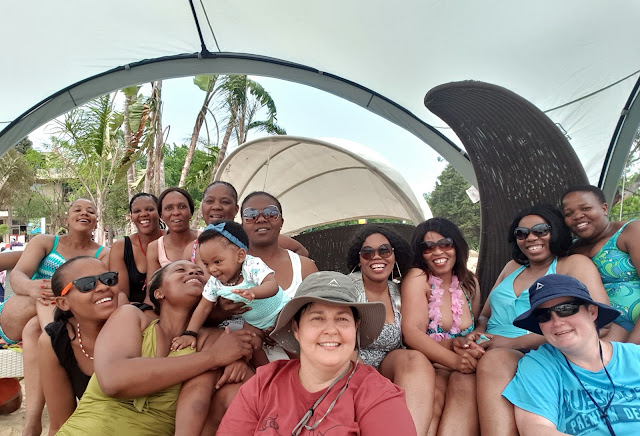 The teams from River Lodge 1 and 2 at Happy Island.
Posted by OT Elphin Lodge at 15:25