When Slick Chick Betty Hood turned 95 on March 23, 2020, she may not have been able to celebrate with her family, but Ron Smith Care Centre – where she has lived for the past five years – ensured that her birthday was a special one.

With the novel coronavirus posing a great risk to older people and those with underlying medical conditions, all but essential visits to the Rand Aid care centre are being restricted, which meant that Betty’s son Robert was unable to be with his mom in person on her big day.

“However, he organised lovely eats for everyone on River Lodge 3, the care centre provided a cake and some beautiful flowers for Betty, and a special birthday tea was held to celebrate her momentous day,” says Debbie Christen, Rand Aid’s Recreational Programmes Manager.

Despite being a stay-at-home mom, Betty was part of a highly successful business venture. She was a member of the Slick Chicks, a women-run catering initiative that was a household name in Port Elizabeth for over 20 years.

Betty, née Godwin, and her twin sister Peggy were born in Durban. Betty finished her schooling at a secretarial college before starting work as a secretary at Peach and Hatton in the city.

She met her husband, Leslie Hood, in Durban. He came from Port Elizabeth and had volunteered to serve in the Second World War with the Royal Navy. He was in Durban for training before being posted overseas when he was invited to the Godwin family home for a meal.

That was the start of Leslie and betty’s war-time courtship. After five years of corresponding, they became engaged at the end of the war and married a year later in Durban.

After their wedding in August 1946, the Hoods moved to Port Elizabeth where they settled and raised their five children, Robert, Brian, Peter, Heather and Andrew. Today, Betty has 11 grandchildren and 11 great grandchildren.

Throughout her life, Betty was a keen gardener. She had a green thumb and reigned supreme over a beautiful garden. She was also an active member of the Port Elizabeth Women’s Club, holding the position of president for several years and attended meetings until well into her late 80s.

Betty moved to Australia in 2011 to live with her daughter and family in Queensland,  visiting her sons and their families in Brisbane on a regular basis.

When her health began failing and Betty needed more support, the decision was made for her to return to South Africa in April 2015, after celebrating her 90th birthday with her whole family in Brisbane. Ron Smith Care Centre – which is around the corner from son Robert – became her home.

“Mom’s favourite saying and philosophy in life is ‘Rome wasn't built in a day’ which could surely be the key to her successes in raising her five children and become a household name in her community,” says son Robert. 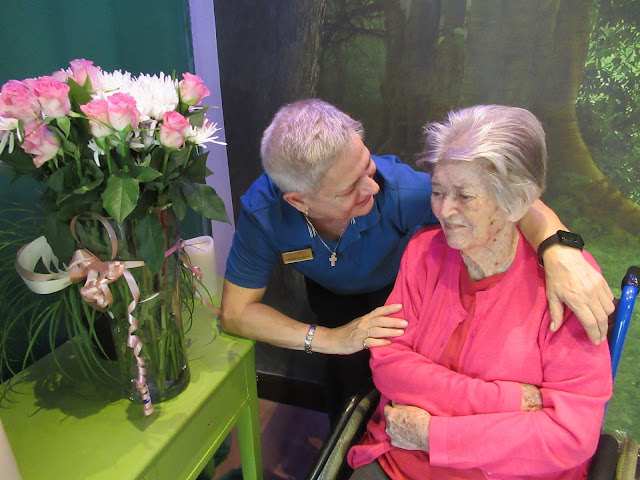 Staff Nurse Laurentia Jooste shares a quiet moment with Betty and gives her loving wishes for her 95th birthday.